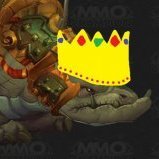 The Rebuilding of Thunder Bluff